Tomorrow, Then and Now

Cartoonist presents a retrospective on his work.
By Kerry Barger ’11

National radio commentator and author Jim Hightower once said, “If Thomas Paine were alive today, he’d be Tom Tomorrow.” Ithaca College students and faculty got a taste of what it would’ve been like to meet Thomas Paine when Dan Perkins, who uses the pen name Tom Tomorrow, visited the school as part of the Park Center for Independent Media (PCIM) speaker series.

Perkins writes and illustrates This Modern World, a weekly comic strip that appears in approximately 80 newspapers and magazines across the country — from small weeklies like the Ithaca Times to popular political websites like Salon and Credo Action. He highlighted some of his best comic strips on September 16, when he spoke to fans in Emerson Suites. His lecture ranged from references to some of his earliest columns to a preview of his ninth cartoon anthology, Future Events Such as These Will Affect You in the Future.

“It’s a thrill to have a visual artist visit Ithaca College,” says Jeff Cohen, founding director of the PCIM. “Having Perkins is a nice change of pace from all the print journalists that we’ve featured.”

This Modern World couples satirical commentary with retro-like imagery to express political and social commentary. The strip parodies highly misinformed citizens in order to expose fundamental flaws in the United States political system. Perkins’s work first appeared in a small zine based out of San Francisco, and since then he has been able to develop his comic strip into a successful brand. “This all started out as an accident,” he admits.

Perkins’s slideshow presentation unfolded the path his career has taken him.

“My work has really transformed from mocking consumerism to writing and drawing about politics,” he says. “Sometimes I forget what I wrote, and when I come across it, I just have to laugh.”

Though the comic strip generally leans toward the left, Perkins will tackle issues across the entire political spectrum. From taking jabs at the Tea Party movement to comparing the “idea” of Obama to the “actual” Obama, he satirizes any and all points of view.

“He’s not just the leading cartoonist in the country,” Cohen says of Perkins, “but one of the sharpest social critics around.”

From authoring the children’s book The Very Silly Mayor to illustrating the cover of Pearl Jam’s 2009 album Backspacer, Perkins has shown versatility in both the media and business arenas.

“He has carved his own path,” says Cohen. “Not only is he a successful content creator, but he also has the savvy to build up his own syndicate.”

Perkins has used the Internet to spread his brand. His blog at thismodernworld.com has evolved into a multimedia canon of his work that includes animation.

“I got together with an independent company to create a web series using my characters and stories from This Modern World,” Perkins says. “It’s so much different to see your work moving and speaking.”

While the Internet has boosted the popularity of his work, Perkins says that it’s a mixed blessing to have his cartoons and animations online.

“We’re in the era of free content, where newspapers and magazines are declining,” Perkins says. “I’m not sure where my work will be 10 years from now, and it all depends on the evolution of the Internet.”

Though Perkins doesn’t know exactly where This Modern World will take him, one thing is certain: his fans have remained steady and loyal throughout the years.

“We like to label Grateful Dead fans as ‘deadheads,’” Cohen says. “Tonight we saw a bunch of ‘danheads’ who came out to support Perkins.”


Tags: Dan Perkins, Future Events Such as These Will Affect You in the Future, ICView 2010/4, Park Center for Independent Media, PCIM, South Hill News, South Hill Today, Then and Now, This Modern World, Tom Tomorrow, Tomorrow 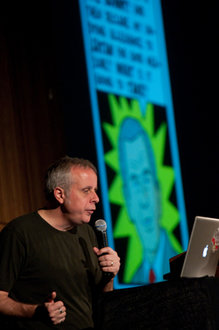