Galeet Dardashti, the granddaughter of Yona Dardashti, renowned singer of Persian classical music and daughter of cantor Farid Dardashti, is the first woman to continue her family tradition of distinguished Persian and Jewish musicianship. She released her new multimedia solo project, “The Naming,” in September 2010, with the support of a Six Points Fellowship and a Hadassah-Brandeis Institute Fellowship. On February 27, the Jewish Studies Program and the Department of Anthropology invited Dardashti to present “The Naming” at Ithaca College in Emerson Suites and to teach a master class on Jewish music of the Middle East.

“The Naming” draws inspiration from the musical and cultural traditions of the Middle East and from some of the provocative yet unsung women mentioned in the Bible. It combines Jewish poetry and song with Middle Eastern musical delivery — both acoustic and electronic — a live band, and three dancers to create an entertaining experience for viewers. Dardashti’s operatic voice is magnificently backed up by violin, dulcimer, and darbuka (a hand drum).

The title of the performance derives from the Jewish tradition of women naming their daughters after a relative as well as Dardashti’s personal desire to honor strong Jewish women and to celebrate her new role as mother. The performance tells the story of why the Queen of Sheba shaved her legs; how the stunning Vashti, wife of King Ahasuerus in the Book of Esther, laid down the law to her drunken husband; and how a mysterious witch spoke King Saul’s doom and then served him dinner, among other tales. The stories in her songs also intertwine with Dardashti’s own Iranian family’s tales of women breaking the rules as well as those of women in the Middle East today fighting to have their voices heard.

Dardashti said the project idea came to her when she realized she could reach more people with a combination of visuals and music.

“To me, it’s a way to incorporate my culture [into my art] with something that is visually very stimulating,” she said. “It is a new and unique way to both carry on my father’s tradition and expand the knowledge of students and audience members.”

Learn more about Galeet Dardashti and her music here and view photos from her performance here. 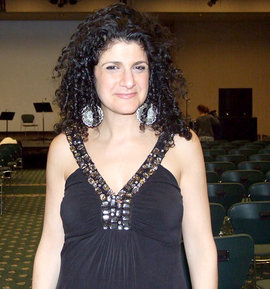