A Year in Bangladesh: Melendy Krantz '09

During the 2009-2010 academic year, I was lucky enough to be on a Fulbright scholarship in Dhaka, Bangladesh. During this time, I engaged in language classes and undertook a research project looking at how upper-middle-class women in Dhaka negotiate the pressures of religion, Westernization, and national identity through sexuality. I chose this topic in part because the world of upper-class women is rarely studied. I also chose this because, in coming to Bangladesh with a degree in anthropology and politics from IC, I was aware of the unequal power relationships that are inevitable when a wealthy, educated foreign woman goes to study Bangladeshi culture. I wanted to work against the traditional power hierarchy of rich white researcher studying poor people of color in rural areas, and, as a result, I decided to focus my research on a class that is higher in wealth, education, and status than myself.

Ten years ago in Bangladesh, these middle-class women did not wear Western clothing, love marriages were rare, and there were no coffee shops, hookah bars, or parties at hotels--locations that have now become meeting centers for young couples. In my research, I have found that today, these women are active in engaging in romantic relationships and thinking about sexual intimacy as something they can control. The purpose of this project is to make sense of how women have negotiated these cultural changes and how their thought processes surrounding these issues change over the course of their life. At the end of the grant period, I completed a collection of narratives about the women I interviewed and am working on an article about the major issues I observed.

Working on this project has transformed me tremendously, and I plan to continue doing research in this area in the fall, when I move to New York to work with a Bangladeshi professor who is studying patterns of sexuality in the diaspora community on a Fulbright grant to the United States. 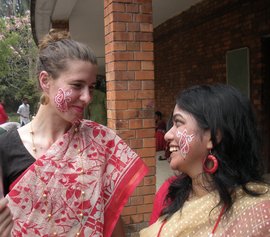