In the early 2000s, seven decades after chronic fatigue syndrome (CFS) was first described, those who suffered from the disease still struggled to convince the world that something was physically wrong with them. Then as now, the disease—known outside the United States as myalgic encephalomyelitis (ME)—had no diagnostic test, no biomarker or telltale biological sign that the sufferer was ill, and no treatment approved by the Food and Drug Administration. But in Southern California, a group called the Workwell Foundation had been successfully verifying ME/CFS by having patients complete two consecutive standard VO2 max tests, which measure the maximum amount of oxygen a person can use during intense exercise, to gauge cardiovascular fitness and aerobic endurance. Where healthy people and those with other illnesses are able to reproduce their first-day performance on day two, those with ME/CFS have significant drop-offs.

For patients, these results can provide proof of the illness to medical professionals and the insurance companies that ovessee disability policies. Word of the approach’s success spread quickly among ME/CFS sufferers. Among them was a friend of IC exercise and sport sciences professor Betsy Keller. Keller and her friend had been out of touch for a while when in 2003 the friend approached Keller about conducting a VO2 max test. The friend believed she had ME/CFS but couldn’t afford—nor physically endure—a trip to California, the nearest place that offered the test.

Keller agreed to have her in for dual sessions on the exercise and sport sciences department’s VO2 max test equipment. “On day one, she tested like a low fitness person who was inactive and not doing too much,” Keller said. “On day two, I looked at the data and immediately checked the equipment thinking it was out of calibration. The test made no sense. How could measurements drop so precipitously? But in fact, the equipment was not out of calibration. What I was seeing was real.”

“That was the beginning,” Keller said. Fifteen years later, she has tested about 150 patients, giving her a depth of experience with the disease that is shared by a select few. Now she is among the leaders of a new ME/CFS collaborative research center based at Cornell University and encompassing seven other institutions, including IC, funded with a five-year $9.4 million grant from the National Institutes of Health (NIH). The center at Cornell is one of three that the NIH established last fall; the other two are based at Columbia University and the Jackson Laboratory for Genomic Medicine in Farmington, Connecticut. A data management and coordinating center at Research Triangle Institute in North Carolina has also been awarded an NIH grant to manage  the findings of the three centers. Together the centers are undertaking a multifaceted five-year study that is arguably the most comprehensive research effort to date—some would say the first comprehensive research effort to date—to find the cause of the disease. Keller heads the “clinical core” of the Cornell center’s initiative, leading a team that will collect VO2 max test and other data at the three sites—including IC—to feed three investigations, two at Cornell and one at Weill Cornell Medicine in New York City.

A MISUNDERSTOOD AND DISRESPECTED ILLNESS

To many ME/CFS patients and advocates, the new round of NIH funding is a sign that the disease is finally getting the medical and scientific respect it has long deserved. Even the disease’s name shows a lack of respect, Keller said. Coined by the Centers for Disease Control and Prevention (CDC) in the 1990s, “It lacks heft and has really done considerable harm in terms of legitimacy of the illness,” Keller said. “The typical response when someone says, ’I have chronic fatigue syndrome’ is 'Oh, I get tired, too.' But fatigue is just one part of the symptom complex.”

Signs of the disease can also include short-term memory and concentration problems, muscle and joint pain, immune system issues, headaches, hypersensitivity to noise and light, dizziness, sore throat and flu-like indications, and sleep that fails to refresh, among others. The patient’s exhaustion worsens with physical, mental, or emotional exertion, leading to post-exertion malaise. So, un.like most other illnesses, traditional graded exercise therapy will worsen the symptoms. It affects patients’ ability to function as they had previously—to do simple daily tasks, hold a job, go to school, and participate in family and social life. For more than 25 percent, the disease leaves them housebound or even bedridden for long periods of time, according to the CDC.

Lack of respect for the disease extends to the medical community, where Keller notes that many medical schools don’t include the disease in their curriculum and many medical professionals continue to incorrectly diagnose the cause as psychosomatic. Levels of research funding also reflect the low regard in which the disease is held. The NIH is by far the largest source of public funding for medical research in the United States, and ME/CFS has long been among the major dis.eases receiving the least funding. In 2017, ME/CFS was receiving funding equivalent to $15 per U.S. person. By way of comparison, food allergies research receives $79 per person, multiple sclerosis gets $111, depression $438, and HIV/AIDS $3,000.

Ron Davis, ME/CFS researcher and professor of biochemistry and genetics at Stanford University, noted in the 2017 documentary Unrest that, for years, many in the NIH didn’t believe the disease was real. “Why would you fund something that’s not real?“ he asked rhetorically. Keller is among those who credit a 2015 Institute of Medicine report for helping to elevate ME/ CFS’s stature. Commissioned by six federal organizations, including the CDC, NIH, and Social Security Administration and counting Keller and Davis among its contributors, the report did three important things:

ME/CFS appears to be only slightly discriminant regarding its victims. Sufferers come from all regions of the world. Whites are diagnosed more than other ethnicities, but all are affected. Many with the disease are undiagnosed, especially among minorities. The average onset age is between 40 and 60, but the disease can affect people at any age. There is a significant population of patients who became ill as children. More than two-thirds are women, but that imbalance could be caused by a greater reluctance among men to be tested. And while the disease was first identified in 1934, historical evidence suggests it’s been around much longer than that. ME/CFS is generally diagnosed by excluding alternative diagnoses, a process that usually requires a frustratingly long and time-consuming series of referrals and sometimes results in faulty diagnoses. The uncerainty has contributed to patients being a highly motivated group on the whole.

“I’ve never had a patient say, ’I can’t come back for day two’ of their VO2 max test, even though I know they don’t feel very good,“ Keller said. “I’ve had patients who, when we are done testing them, ask me to go out into the waiting room and tell their family the results, so they can see that this is not just all in their head.“

Of course, the diagnosis also has its downside. While recovery has been documented in some who contracted the disease in preadolescence, no evidence exists of full recovery by those who were afflicted as adults. Some achieve a semblance of recovery, Keller said, by treating the symptoms—such as improving their sleep and learning to manage their energy in hopes of avoiding the post-exertion malaise that can put them out of commission for days.

“I call it living circularly versus linearly,“ Keller said. “Healthy people do tasks A, B, C, D, and E, and then go to bed. [ME/CFS sufferers] do task A, then recover, task B, then recover, and so on, making sure they have intermit.tent recoveries so that they don’t exacerbate their symptoms. Knowing their tolerance for exertion is important, and that’s part of what we learn through the exercise test.“

As for finding the cause, a lot has been learned about ME/CFS in recent years. The disease affects the autonomic nervous system— things such as blood pressure, gastrointestinal activity, sensory stimuli, and the immune system. What throws the system off is difficult to pinpoint, but evidence exists for a number of possible physical contributors.
Many contract the disease after exposure to certain viruses, such as Epstein Barr virus, the cause of mononucleosis, or another viral infection. The fact that not everyone who has those viruses comes down with ME/CFS suggests that genetics play a role. And the significant immune system response—particularly in the disease’s early phases—suggests that it, too, plays a role. The five-year study Keller is involved in will focus on these and other areas.

KICKING OFF FIVE YEARS OF RESEARCH

In the study, Keller and Geoffrey E.Moore, an Ithaca physician and adjunct graduate faculty member in IC’s Department of Exercise and Sport Sciences, are responsible for orchestrating three years of VO2 max testing at three locations. Moore’s role is to lead the screening of test subjects—10 each year who meet the study’s diagnostic criteria for ME/CFS and 10 healthy control subjects. Keller oversees testing and management of the test data and samples collected at all three sites: an infectious disease clinic in greater Los Angeles, Weill Cornell Medicine in New York City, and the Robert R. Colbert Sr. Wellness Clinic in IC’s Center for Health Sciences, where she also conducts the testing. Each year, 20 subjects will be tested at each site.

For each subject, blood and urine samples are taken before and after each exercise session, and vital signs are measured during the workouts—including electrocardiogram, blood pressure, oxygen saturation, and expired ventilatory gas readings—to determine peak oxygen consumption. At the New York City site, subjects also receive brain scans with magnetic resonance imaging (MRI) equipment and a positron emission tomography (PET) scanner before and after each session.

The team feeds their samples and test results to three project teams:

RESULTS OF THE RESEARCH

All three areas are on the cutting edge of ME/CFS research, Keller said. Extracellular vesicles and metabolomic studies have received very little attention, RNA sequencing is an emerging area, and the brain imaging study is the most exhaustive to date, particularly for viewing images before and after exercise. Keller’s testing began in July and will last for three years. In the final two years of the five-year study, she’ll be involved in data management and analysis, and writing reports and scientific articles related to the study. She’s cautious but optimistic about what they’ll find.

“I don’t expect that cause and cure will come out of this, though it would be great if it did,” Keller said. “We hope it will lead to a closer understanding of the illness, to making patients’ lives better, so we minimize the effects of the illness if not find what causes and cures it. Finding a biomarker would be a great outcome. When I give talks about this, I say my hope is that I’ll never have to do an exercise test on a patient again.” 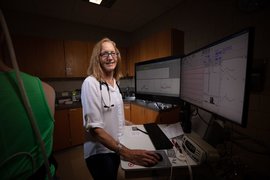