September 29, 1973
Ithaca defeats Cortland, 41-33, in the first of nine straight victories for the Bombers and the longest winning streak in Cortaca history.

November 8, 1980
Running back Bob Ferrigno ’81 runs for 133 yards in a 21-7 Bomber win, finishing the regular season with 1,307 yards and setting a single-season record that still stands.

Npvember 5, 1983
In a game televised by ABC, Ithaca takes back the jug, defeating Cortland, 49-26. Current Cortland head coach Dan MacNeill is on the Ithaca sidelines as a Bomber assistant coach.

November 5, 1988
Both teams sport 8-0 records and meet at Cortland’s Chugger Davis Field in front of nearly 8,000 fans. Coach Dennis Kayser ’74 and his Red Dragons win the thriller, 21- 20. (Later the Bombers and Red Dragons meet for first and only time in the NCAA playoffs, and Ithaca wins, 24-17.)

November 6, 1993
Butterfield leads the Bombers to a 32-14 win over Cortland for the 209th and final victory of his career in his final home game.

November 11, 2000
In the final game at Cortland’s Chugger Davis Field, the Bombers top the Red Dragons, 27-20, behind a school-record 39 carries from running back Tommy Giorgio ‘01.

November 12, 2005
The first overtime game in Cortaca history ends with the Red Dragons prevailing, 37-30. Felicetti throws for a Cortaca-record 373 yards.

November 10, 2007
Donovan scores a trio of rushing touchdowns to break Ithaca’s all-time record of 44. He would finish his career with 46. 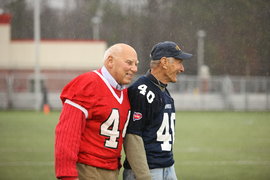 Dick Carmean '60 and Tom Decker were the creators of the Cortaca Jug. (Photo by Darl Zerh Photography)