Jon Bougher ’06 was the right guy in the right place at the right time. That would be Haiti, January 12, 2010.
By Brenna Fitzgerald

Survival is an instinct. Serendipity an afterthought. That’s how it played out for Jon Bougher last January.

The IC sociology graduate was filming a documentary about humanitarian efforts in Haiti for his master’s thesis project for the Documentary Institute, formerly of the University of Florida in Gainesville. He and his filming partner, Roman Safiullin, had been following the activities of a rising nonprofit organization, Planting Peace, founded in 2004 by Haitian John Dieubon and American Aaron Jackson. While Bougher and Safiullin were visiting an orphanage run by Planting Peace, an unexpected event happened that changed the course of their film and catapulted them into the national media spotlight.

“We had been filming pretty much all day in a rural part of the country where a new school was being built,” says Bougher. “We got back to Delmas 33, which is in Port-au-Prince, and were having a late lunch of rice and beans at the main orphanage. John [Dieubon] was talking about his plans for the future of his community when around 4:44 p.m. we heard a low rumbling. At first I thought it was a large truck. But the rumbling kept building and building and building. I think it took each of us about four or five seconds to realize that this was an earthquake.”

The three of them got up, ran outside, and went to the front of the orphanage near a wall. They started to see buildings crumble and hear people screaming.

“It was there that it really hit home for me,” says Bougher. “Anyone who hesitated the moment the quake hit was eventually killed. If they were in a structure that wasn’t sound in any way, it collapsed on them immediately.”

The epicenter of the 7.0 earthquake occurred about 15 kilometers from Port-au-Prince, where an estimated two million people resided. It was deemed the worst earthquake to hit the region in 200 years. Fortunately, the orphanage withstood the tremors, and none of the children was hurt. With only 40 minutes of battery life left on their camera and no electricity to recharge, Bougher and Safiullin went into the streets and started filming.

“What surprised me most was the range of emotions,” Bougher recounts. “There were people screaming for loved ones and people praying to God, but others were just walking around in stunned silence. The calm quiet that eventually settled in was very disturbing. But most important, I remember the faces of the orphans, their terrified looks.”

For the next two days, Bougher comforted the orphans and watched as the community he had been filming struggled with the quake’s aftermath.

“I will always remember a home that completely collapsed, killing an entire family, their pictures scattered on the rocky ground outside as neighbors pulled bodies from the rubble,” he says. “I will remember the woman who screamed over her mother’s death, her shrieks piercing an eerie calm. And I will remember the bodies lining the street, including a young mother covered in a sheet next to her infant daughter. Our film focuses on people’s faces a lot. We wanted to get more personal footage while also looking for material that would give our audience a sense of the destruction that was there.”

Bougher’s interest in people stems back to his undergraduate work. Starting out in the Roy H. Park School of Communications with interests in photography and fiction film, he switched to sociology in the School of Humanities and Sciences. “I was interested in learning more about people and their experiences and, through that, learning more about myself and how to become a better person,” he explains.

After Ithaca, Bougher served as an AmeriCorps VISTA volunteer on the Tohono O’odham Nation, an American Indian reservation in southern Arizona. There, he developed media literacy programs, conducted youth filmmaking workshops, and established the first-ever film festival on the reservation. The experience revived his love of filmmaking and motivated him to enroll in graduate school.

“I still had the bug to combine my interest in people with my interest in film,” Bougher recounts. “That’s really what I learned at Ithaca — this idea of trying to translate the human experience. I’m interested in helping people to understand others through film and giving them a better sense of the human connection. Documentary film is a great way to do that.”

This was the driving force that launched his film work in Haiti before the earthquake hit and determined his choice of subject. Planting Peace has its hands in everything, from building schools and orphanages to eradicating disease to organizing wide-scale local environmental clean-up efforts and protecting endangered species. Bougher’s film began by focusing specifically on the organization’s efforts to provide deworming medications throughout Haiti, where 80 percent of the population is infected with intestinal parasites that contribute to rampant malnutrition. Anemia, poor cognitive development, weak immune systems, and death are some of the effects of malnutrition. Deworming is not only effective, it’s cheap. A mere dollar will deworm 67 children.

Bougher was also impressed by the relationship between the two founders from strikingly opposite origins: Jackson, raised on a wealthy Florida resort, has dedicated his life to eradicating intestinal parasites in Haiti. Dieubon, born and orphaned in Port-au-Prince, is committed to inspiring a new generation of Haitian children. Devotion to improving the quality of life in the poorest country in the Western Hemisphere led the pair to establish Planting Peace.

“We were following the story of Aaron and John, their work in Haiti, and their commitment to the children they were helping,” Bougher explains. “In that sense we knew the story wasn’t going to change. Once we had the earthquake footage, we knew immediately that the film took on a new importance.

“One of the things that really interested me in Haiti was the psychological effect of shock and how it can serve as fuel to aid the country. We wondered how this major catastrophe was going to affect John and Aaron and their view of their work and their relationship. If anything, it emboldened their work. John, who is probably the most optimistic man I’ve ever met in terms of being passionate about Haiti, was definitely struggling with what happened. He literally went into the streets after the earthquake, bringing bodies into the morgue, where they were stacked six feet high. He had trouble dealing with that, but I think it made him realize that this was an opportunity that could lead to changes for a better future. This is reflected in the film.”

After being evacuated from Haiti a few days after the earthquake, Bougher and Safiullin were surprised to learn that they had been reported missing and to find the media eagerly waiting to interview them. Within a day they had guest appearances scheduled on the Today Show, MSNBC, and Fox News, where they revealed some of their footage and talked about their experiences while advocating for help in Haiti. The Chronicle of Higher Education and the Gainesville Sun were among the newspapers to pick up their story.

“Unfortunately, the media attention on Haiti has faded, pushing this tragedy to the recesses of our newspapers and minds,” Bougher told the IC Department of Sociology for a web announcement it was preparing shortly after his return, “but we must use this as an opportunity to study the seemingly intractable problems of the third world. The people of Haiti, living only a stone’s throw from the United States, should never be forgotten. I want to open up a discussion about the situation there and why it isn’t getting any better. I hope our film (Bound by Haiti) will help send this message across the country and, hopefully, the world.”

Today, on the eve of the anniversary of the tragedy that killed more than 230,000, injured 300,000 plus, left more than a million people homeless, and created 20 million cubic meters of rubble, 1.3 million people are still living in about 1,350 overcrowded, unsanitary relief camps that were supposed to be temporary. The long stays, coupled with dwindling food, have spawned violence and high levels of rape. Heavy rains and flooding last October have demolished some of these structures and killed at least 12 people. To make matters worse, more than 140,000 of these people have been threatened with eviction from landowners, and according to reports published in October in the New York Times, 28,000 have actually been evicted. Cholera, should it break out in the camps, threatens to take an even graver toll.

Walter Kaelin, a top U.N. representative on human rights, says Haiti is still in the midst of a profound crisis. While he urges speedier reconstruction, suspicions abound that those with political connections have been — and will be — the first to benefit from those efforts. As of October, international donors have pledged nearly $10 billion, but only about 15 percent of it has reached Haiti for reconstruction.

“While earthquakes are not preventable, the scale of destruction that occurred in Haiti could have been avoided,” says Bougher. “Generations of international indifference and government corruption created a weak infrastructure that literally collapsed on its people. Roman and I feel we have a special responsibility, not only with our film, but also to Haiti itself. The Haitian people are incredibly resilient, and you can’t help but be inspired after living with them. When you’re connected in that way, and you share an experience like we shared, there’s an unshakeable human bond. Haiti will be a part of me for the rest of my life.”

What a strange lead... think about it!

Seriously...did a college with a Communications school really just make this the lead line? Really?

What was right about having an observer during a devastating earthquake that took the lives of thousands?! I'm tired of seeing Haiti become the fodder for zealous journalist looking to advance their careers. 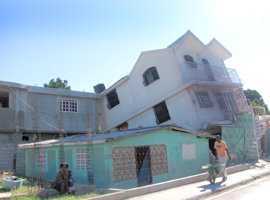 A demolished home near the airport in Port-au-Prince 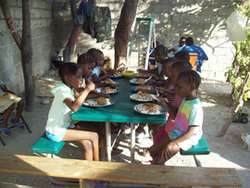 Children enjoying a meal at Planting Peace's Orphanage #1in Port-au-Prince, just minutes before the 7.0 earthquake hit 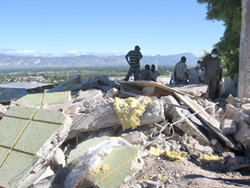 Rubble from a family home in Port-au-Prince, about 200 feet from Orphanage #1


John Dieubon and Aaron Jackson walk on the remains of the home of a friend of John’s in Port-au-Prince, about 500 feet from the orphanage

“One of the things that really interested me in Haiti was the psychological effect of shock and how it can serve as fuel to aid the country.”--John Bougher '06

Photos courtesy of Bound by Haiti