“If you think about it as a mobile food, cupcakes are perfect,” says Ekster. “You don’t need utensils to eat them, you can hold them in one hand, you can have coffee in another hand.”

A cupcake lover himself, Ekster had become frustrated by the long lines at New York’s many cupcake shops. On top of that, he was dissatisfied by the mediocrity of their products. With the decisive, problem-solving mind of a born CEO, Ekster brainstormed ways of improving the business and batter of cupcakes in New York.

First, he partnered with a struggling mobile pizza truck vendor who already had a food vending permit. Next, he hired a baker, a publicist, and a staff of part-timers. Last June, within three weeks of his New York Law School commencement, Ekster commenced business as Cupcake Stop.

“It caught on faster than I was expecting,” he says. “Now we have police officers double-parking in front of us to buy a cupcake through the window.”

Ekster had planned to take the bar exam in July while running Cupcake Stop on the side, but the immediate success of it turned his career plan B into a nice way of making a living.“I enjoy working for myself, being my own boss, and setting my own schedule,” he explains. “I like that, here, you see a direct correlation between how hard you work and how well your business does.”

Instead of paying for advertising, Ekster diligently updates social networking sites like Facebook and Twitter to create a steady buzz for his cupcakes. But he insists that the real reason people keep coming back is because they are fresh and delicious.

“I think people are realizing that you can actually buy something of better quality and better tasting from a mobile truck than you can get in the stores,” he says.

With innovative flavors like tiramisu, red velvet, and banana ginger, and allergy-sensitive options such as gluten-free, who wouldn’t wait in a long line for these cupcakes?

But, thanks to Ekster, you don’t have to. 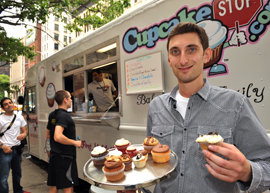