More than $1 million raised for the new Robert B. Tallman Rowing Center

Crew athletes, coaches, friends, and College staff joined President Rochon September 7 for the groundbreaking ceremony for the Robert B. Tallman Rowing Center. The existing boathouse, built in 1974, was demolished soon afterward so construction could proceed. The event came on the heels of a successful campaign — chaired by former rower Jerry Dietz ’75 (center) — that raised more than $1 million from 397 donors for the structure.

Check out the progress being made on the building's construction here. To see a gallery of photos from the groundbreaking ceremony, click here.

- A mezzanine with ergometers and a balcony

- A fitness area for all-season training

- A workshop and a coxswain's area

- Lockers and cubbies for coaches and students

- A stone patio plus a storage shed

- The Becky and Dan Robinson Waterfront

- Parking spaces for cars and a boat trailer 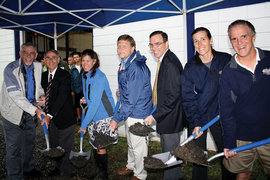 Groundbreaking ceremony for the Robert B. Tallman Rowing Center