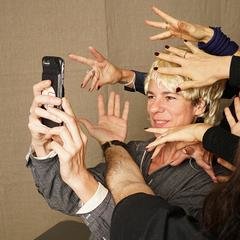 Justine Kurland (Faculty), known for her utopian photographs of American landscapes and their fringe communities, has spent the better part of the last twenty years on the road. Since 2004, Kurland traveled with her son, Casper—her life as an artist finely balanced with the demands of a parent. Casper appears at different ages in the photographs, against open vistas and among the subcultures of train-hoppers and drifters. Recent work returns home after so long on the road to her apartment in New York City, her hometown of Fulton, New York, and her mother’s home in rural Virginia.

Justine Kurland (born in Warsaw, New York, 1969) received her BFA from the School of Visual Arts and her MFA from Yale University. Her work has been exhibited extensively at museums in the United States and internationally. Recent museum exhibitions include The Open Road at the Detroit Institute of Art, Detroit, Michigan; More American Photographs, Wexner Center for the Arts, Columbus, Ohio; and Off the Grid, Fotodok, in the Netherlands. She was the focus of a solo exhibition at Mitchell-Innes and Nash this past spring and a two-person exhibition at Higher Pictures this summer. Her work is in the public collections of institutions including the Whitney Museum of American Art, Guggenheim Museum, and International Center of Photography, among others.