Kevin Greene ’06 was one of the finalists in a weeks-long on-air audition process for the lead role of Danny in the upcoming Broadway revival of Grease. NBC created a reality show, Grease: You’re the One that I Want, as a talent competition series in which the audience had input into choosing the lead male and female actors. Kevin, who graduated with a musical theater degree, was one of hundreds of actors who tried out for the parts of Danny Zuko and Sandy Dumbrowski. He and several dozen others then advanced to “Grease Academy,” where they trained with Tony winner Kathleen Marshall, who will direct and choreograph the Broadway production.

The initial group was cut down to 24, and then finally 6 Dannys and 6 Sandys were selected to reach the semifinal round. Kevin was known as “Bellhop Danny” on the show. A native of—really—Greece, New York, he had been working as a bellhop at a Manhattan hotel while auditioning for theater roles.

While at Ithaca College, he played Kenickie in a 2005 IC Theatre production of Grease. Other stage appearances included roles in the Shakespeare comedy Twelfth Night and the Neil LaBute drama The Shape of Things. ICView readers may remember him from the cover of our 2004/4 issue, “Gen 3,” in which he was featured with his father, Jeffrey Greene ’76, and grandfather, Gareth Greene, M.S. ’61.

Even though Kevin did not win the role of Danny, he made a lot of fans over the three weeks he was in the running, and we suspect he’ll have plenty of offers. 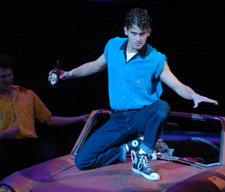 Kevin in the 2005 IC production of Grease