Shooting video for New York Fashion Week or taking over Instagram’s official account to cover the March for Our Lives in Washington, D.C., would be bucket-list achievements for most media professionals. For student entrepreneurs in Ithaca College’s Roy H. Park School of Communications, however, it’s business as usual—even if they are writing term papers en route to an event or blocking out time between classes to remotely attend a client meeting.

“I feel like I’ve had a significantly different experience than other people,” said Casey Schoch ’19, who is one year into a five-year contract with Amazon to stream her short film, Dead Weight, which she created as a sophomore at IC. “I’ve just been super fortunate in that way, that I knew what I wanted to do, and I’ve had the chance to meet all these incredible people who have helped me move forward with my career.”

By taking advantage of the hands-on training, mentorship, and alumni network afforded by Ithaca College, Schoch and other students have been able to take their careers to the next level. Rather than putting their dreams on hold until after graduation, they have been building their media livelihoods while earning their degrees. 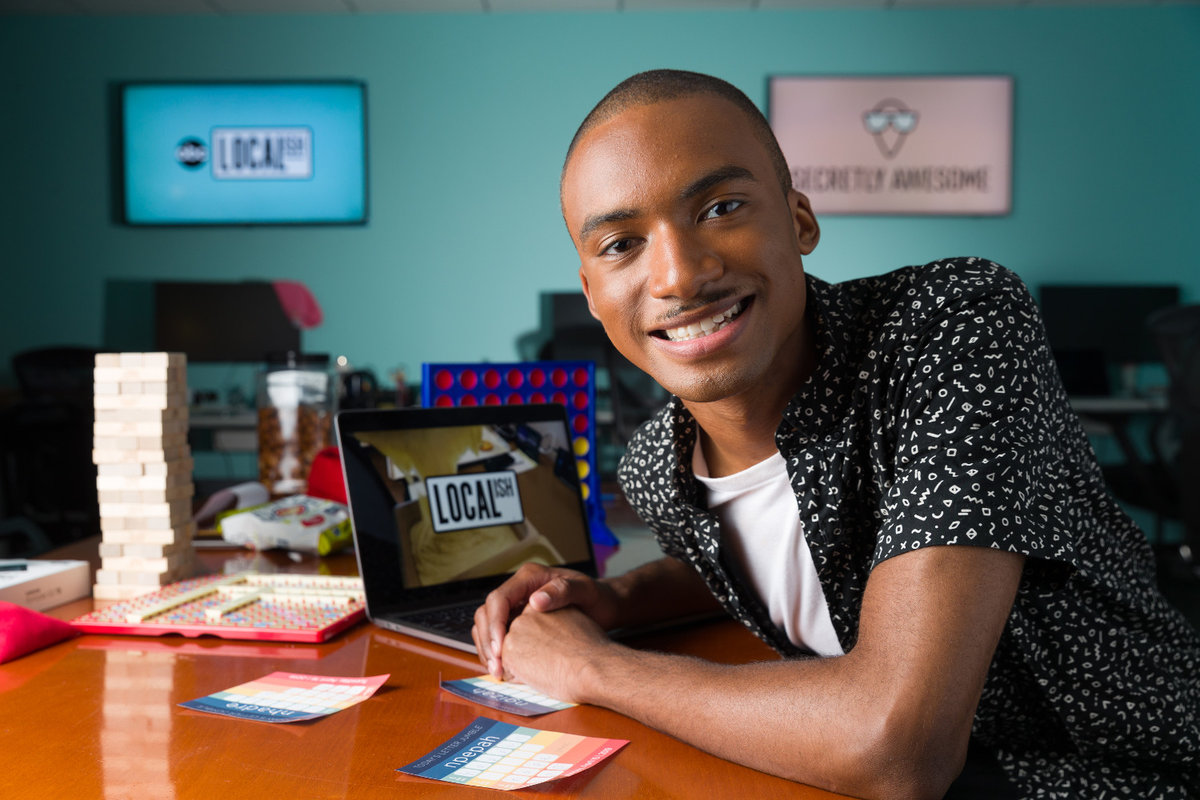 Out of the blue in March 2018, Malick Mercier ’21 heard from a producer at Instagram. She got right to the point, he recalls: “How would you like to be the host for our March for Our Lives coverage?”

Just a few days later, Mercier [@classymalick on Instagram] was in Washington, D.C. He shared his experiences at the demonstration against gun violence with Instagram’s followers—which at the time numbered more than 230 million.

“I was lifted high into the sky via a scissor lift above the crowd that I now know was hundreds of thousands of people,” Mercier said in interviews with the college right after the march. “I was truly moved at that sight—all those people coming out to fight for something they believed in, and it was organized by students! I could feel the energy, which strengthened me and my work.”

That led to a wave of other opportunities. Media company Mic asked Mercier to host its Instagram coverage of the first stop on the March for Our Lives Road to Change tour. Teen Vogue and shoe brand TOMS cast him in a video urging young adults to vote—and then came JetBlue, Converse, CNN, DoSomething.org, and the list goes on.

The Instagram pitch may have come as a surprise, but Mercier has been building a professional portfolio and reel since high school, when the self-professed aviation geek began freelancing for aviation news site AirlineGeeks.com and interning with public access Manhattan Neighborhood Network.

Ithaca College, he said, offered the chance to build on those skills from day one—and a full-ride scholarship through the Park Scholar Program. “Just seeing that other schools wouldn’t let you get hands-on experience, especially your first year, was just really annoying,” he said. “I think a lot of us are already figuring out ways to tell stories, whether it be on social media or on other platforms, in high school.”

Mercier scaled back his projects temporarily while on leave from the college to recover from a car accident. But he sees that break as a way to find his focus and hone in on his goals amid the opportunities coming his way.

“I’ve been approached by all these different brands and news organizations,” he said. “I’m figuring out, who do I actually feel I’m more like? Realizing where your values are and what you align with more is a cool thing that I’ve been able to do,” said Mercier. 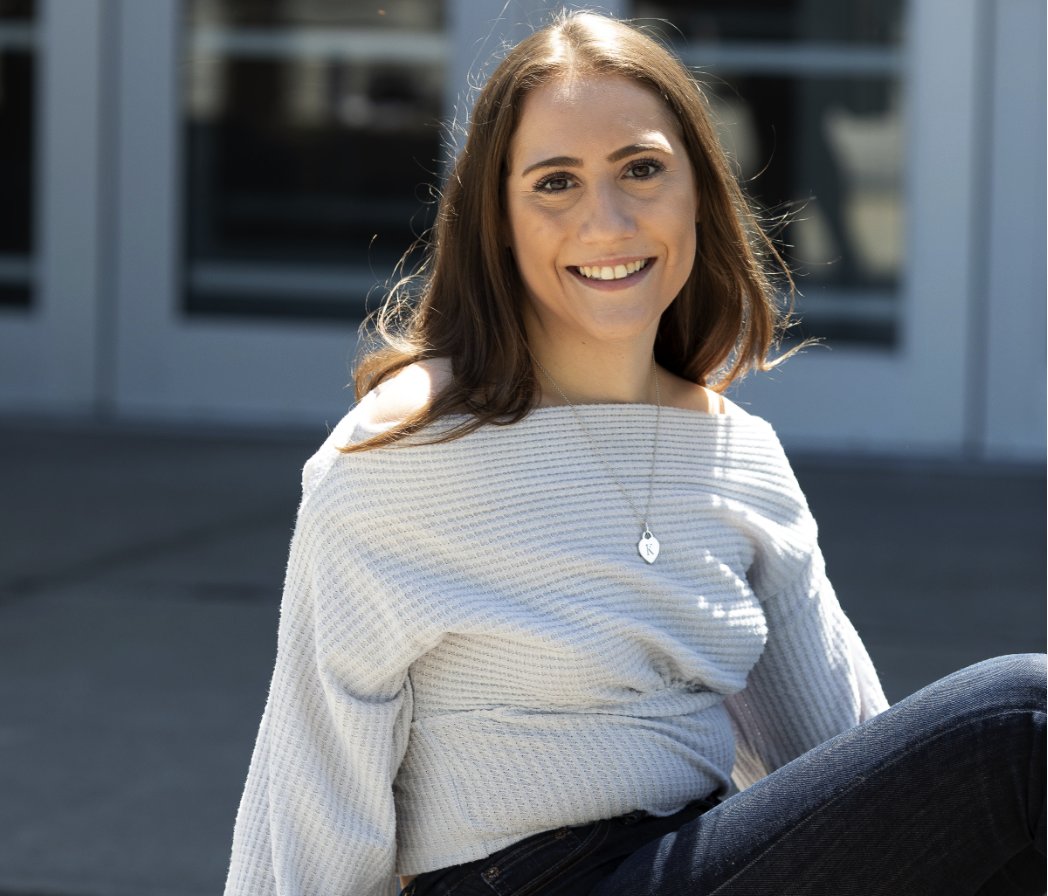 An open spot in her high school schedule proved serendipitous for Kristin Butler ’20. Butler’s mother suggested she take a marketing class to learn how to better market herself for job opportunities. “I ended up doing really well in it, and actually loving it, and understanding all the strategies and the ideologies that come with it,” she said. “It really inspired me to want to do something with marketing.”

With that new career path in mind—and two parents who graduated from the Park School as TV-R majors—Ithaca was the first place Butler looked for a marketing program. The college’s integrated marketing communications degree seemed like a perfect fit.

The summer after Butler’s freshman year, she had an internship with Boston-based startup Armored Things, which quickly escalated into bigger opportunities. The company uses technology to create safety solutions for large venues.

“The first week I was actually promoted,” Butler said. “I was able to work on social media for them and help them network with clients, and so that was a really great experience.”

She continued working for Armored Things through her sophomore year at Ithaca, remotely attending meetings and working on projects. “It was really exciting to see that I was able to really make a difference within the startup culture,” she said. “You can feel insignificant in large corporate environments, and I didn’t feel that at all here.”

“I feel like I know a lot, and I should know a lot because there was no department of marketing there when I started,” Butler said. “It was just a startup with five people, and I was the one involved in all this marketing. It really let me see that I’m far more capable of doing things than I even dreamed of.”

Now a senior, Butler has shifted her focus. “I really want to be in an advertising agency and be a part of that,” she said.

She’s still freelancing for Armored Things but has also taken on other clients—including a photography-videography company that uses drones. “I’ve been helping them understand how to position their brand,” she said, “as well as determine how to target an audience using social media. I’ve been able to challenge myself and accomplish things that I had never even realized that I would attempt to accomplish,” Butler said. 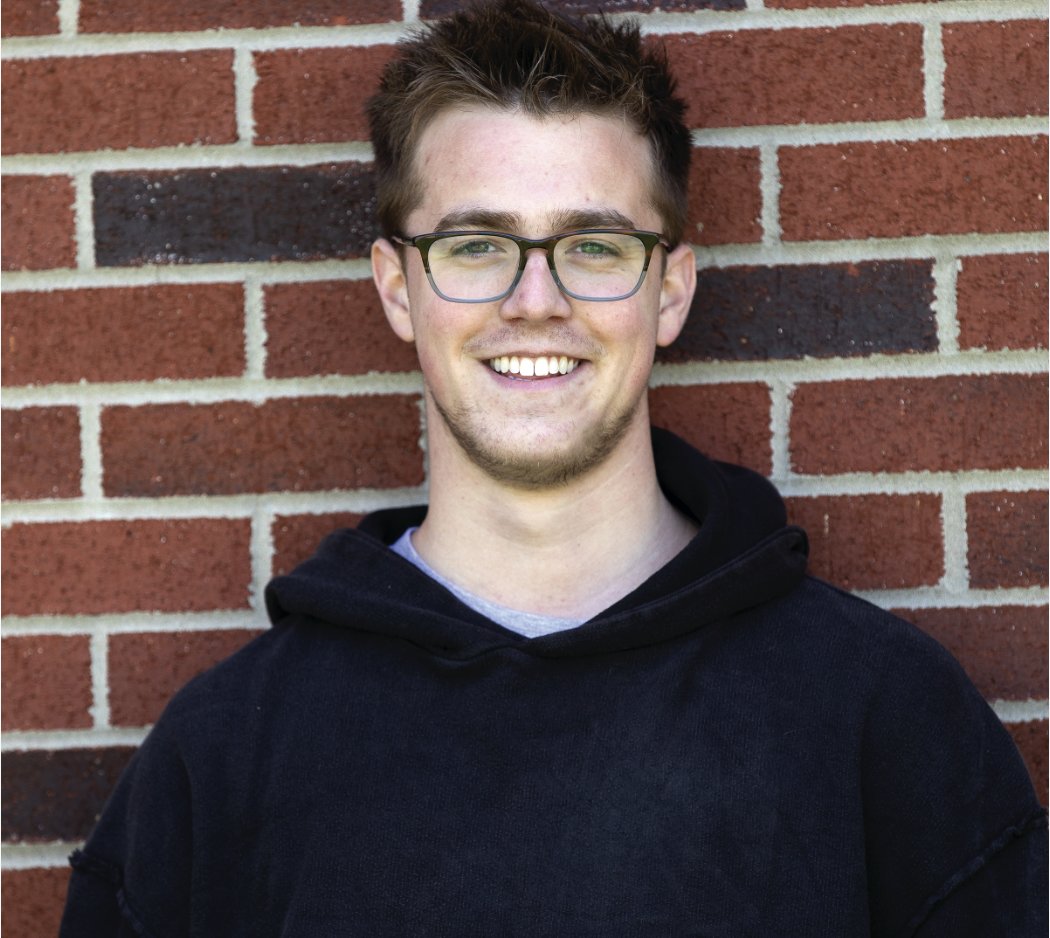 Launching a YouTube channel at the ripe old age of 10 provided Jake Lattimore ’21 with his first foray into media. By his freshman year of high school, he was shooting and editing videos for his Instagram (@jakelattimore4)—and hatching a business idea.

“I realized that there were a lot of fields where the advertisements and videos made for them were very boring,” he said. “I thought that I could just put a good spin on them and make them exciting.” JL Media was born before Lattimore’s sophomore year of high school.

It was around that same time that Lattimore got his first drone, seeing it as an investment in a tool that a lot of video producers weren’t yet taking advantage of. “I used it to make my videos different and to separate myself from others,” he said.

Clients hiring Lattimore based on his work portfolio were often surprised to discover he was so young. “I was going to business meetings, and my mom would drop me off,” he said. “I walk into the meeting with a mouth full of braces and a button-down [shirt], and they’re like, ‘Oh, you’re Jake.’”

When Lattimore looked toward college, he kept spotting Ithaca connections in artists he admired—such as photographer-videographer Mike Holland ’16, who worked on the Everybody’s Tour for the rapper, singer, songwriter Logic. “He’s doing something that, honestly, my dream would be to do,” Lattimore said.

“What was best for me was going to a school that will set my future up,” he said. “That’s why I chose Ithaca.” Once at the college, Lattimore quickly took advantage of the IC Drone Workshop, which gives students access to the fleet for projects after they take a licensing course. “It’s almost given me the open road to go and do what I want to do,” said Lattimore, and added: “I’m working with equipment now that I’ve only dreamed of.”

As his skills grow, so has his roster of projects. Lattimore has taken on diverse clients, shooting video for big events and organizations including New York Fashion Week, Rochester Jazz Festival, and Save a Child’s Heart, as well as local restaurants, gyms, and real estate agencies.

He sees the semester as a training ground to prepare for breaks where he’ll focus on his own work. “It gives me the time to hone my  craft, to learn new things and how to be better,” he said. 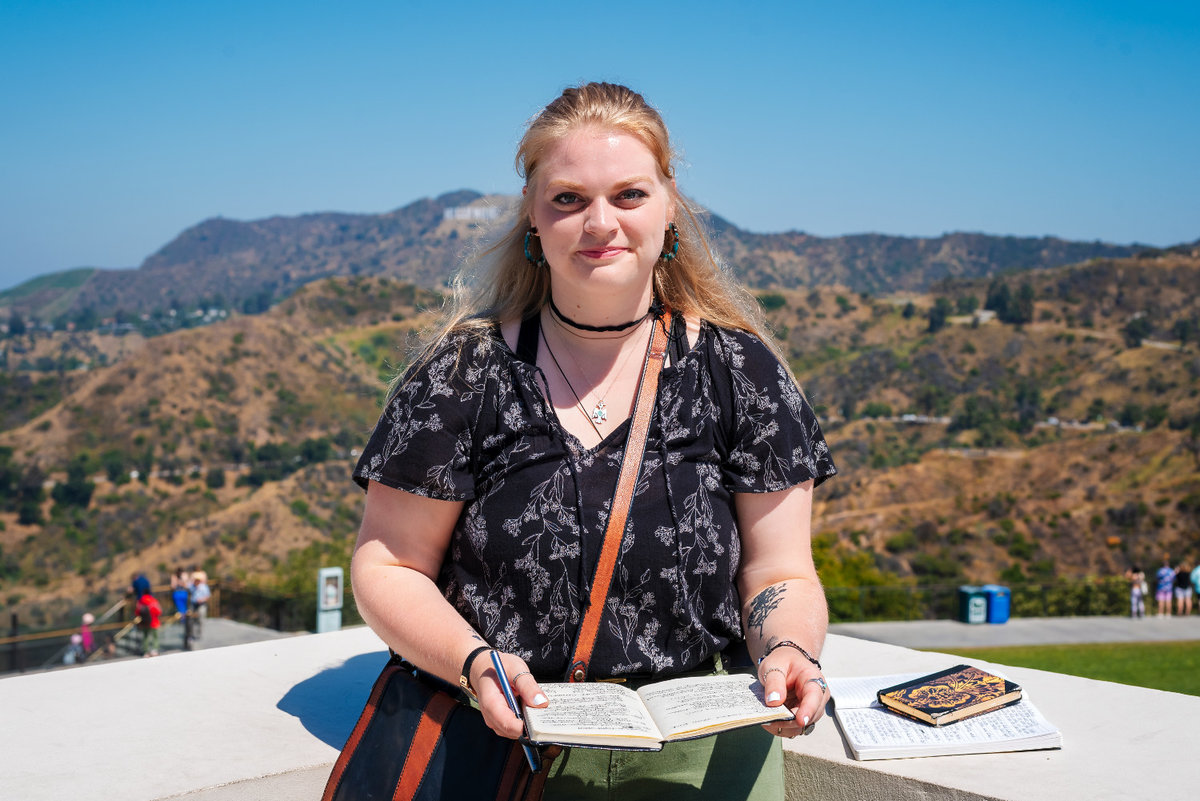 When film festival acceptances started rolling in for Casey Schoch ’19 and her short film Dead Weight, her bosses at film distributor Digital Media Rights took notice. They helped Schoch—who was there for a summer internship—broker a deal with Amazon to stream Dead Weight.

But before she signed the contract, Schoch knew she should get professional advice. She decided to seek guidance from faculty members Phil Blackman in the School of Business and Jack Powers in the Park School.

Blackman and Schoch went through the contract line by line, with Blackman providing an explanation for the key terms and what they meant for the film. Powers focused on the financial aspect and the image of the film to make sure the deal was fair.

Fast forward one year into the five-year contract, and she’s starting to make a profit from users watching. “That’s unheard of for a student film,” Schoch said.

At Ithaca, Schoch got involved right away with IC’s media incubator, The Studio. “Not only did I pitch my own ideas for The Studio, but I was also able to work on other people’s scripts and give critiques,” she said.

Dead Weight came to life during the spring semester of Schoch’s sophomore year. The idea for the film, about a heist gone wrong, came from a short poem she’d written for a creative writing class. Schoch also directed, executive produced, and edited the film.

“I was super fortunate to know exactly what I wanted to do when I came in freshman year,” Schoch said. “Because of that, I was able to hit the ground running. When it came time to film, I knew exactly what I had to do.”

With that first film under her belt, Schoch has since made a historical re-creation for a class, focusing on the last day of novelist Virginia Woolf’s life. And last spring she finished her senior thesis film—a comedy that follows a couple who stage a fight to trick a restaurant into giving them free food.

Then there are her passion projects in progress. The first is a spoken-word piece called “Last Entry,” about a girl who’s dealing with depression. The second is a psychological thriller she originally conceived as a short in high school that she’s turning into a feature film. As a freshman, Schoch pitched the project to Dan Heffner ’78, executive producer of the Saw movie franchise, when he visited for a Pitch It to Produce It event. He liked it, she said, and recommended a few changes.

“I feel like every single thing that’s happened with this process has definitely been just super helpful in understanding where to even go after graduating, and what you can do with the work that you do have,” Schoch said. 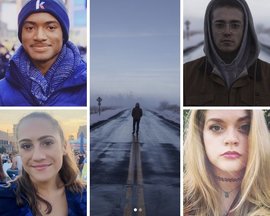