Slogging along muddy paths, crossing logs over running streams, fending off mosquitoes, and rationing out precious water in the intense heat of a West African afternoon -- this doesn’t sound much like what typical physicists do, but it is just what associate professor Bruce Thompson and physics major Nikolas Batruch ‘08 were doing this past March. Together, Thompson and Batruch traveled to Gabon to participate in an international and interdisciplinary study of forest elephants. These herds are potentially endangered by oil development in the lush nature reserves where they live. As a physicist with expertise in developing instrumentation to detect and analyze seismic vibrations, Thompson was called on to provide the hardware to record and analyze the seismic signals associated with oil exploration blasting to help researchers determine the effects of the blasting on elephant herd movement. “I was attracted to this project because it allows me to use my expertise in vibration analysis and instrumentation design, and also because it supports an important conservation project,” said Thompson.

Working with members of the Elephant Listening Project (based at the Bioacoustics Laboratory at Cornell University), Thompson integrated seismic sensors with the preexisting acoustic devices that had been used to study animals in the wild and located 10 different sites in the study area at which to deploy the autonomous recording units (ARUs). Thompson then recruited Batruch to assist him both with the deployment of the ARUs and the data analysis. Thanks to support they received from the International Fund for Animal Welfare and an H&S Ithaca Fund award, the two were able to travel to Gabon, where they trekked through difficult terrain to install the instruments. “Nik was invaluable in helping in all aspects of the work: packing and repacking equipment, assembling ARUs and battery packs, carrying battery packs through forests and swamps in 90-degree humid weather, digging holes for the seismic sensors, taking pictures, and belaying the tree climber,” reported Thompson. Batruch is also assisting with analysis of the first batch of data (harvested from the ARUs in June). The two researchers will attempt to determine the distance and direction of the source of the seismic detonations and the number of elephant footfalls; statistical analysis will then help to determine the effect of human activity on the behavior of the elephants.

Batruch was not only attracted to this project because of the trip to Africa but also because of the opportunity to do a new kind of data analysis. In addition to majoring in physics, Batruch also majors in audio production, where he is accustomed to using his technical know-how to work with music. Batruch says of the Elephant Listening Project, “It will be a new experience for me -- to understand the data and come at it from a scientific standpoint rather than an aesthetic one. I prefer this because it’s much more objective, and I look forward to the process of working with scientists to make sense of the data. I’ll get a lot of satisfaction from knowing that we gathered all this information that can help people understand elephant behavior.” 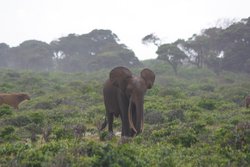 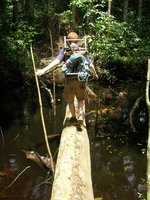 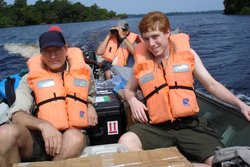